Needle-free jet injectors for intradermal vaccination of pigs: the importance of precision 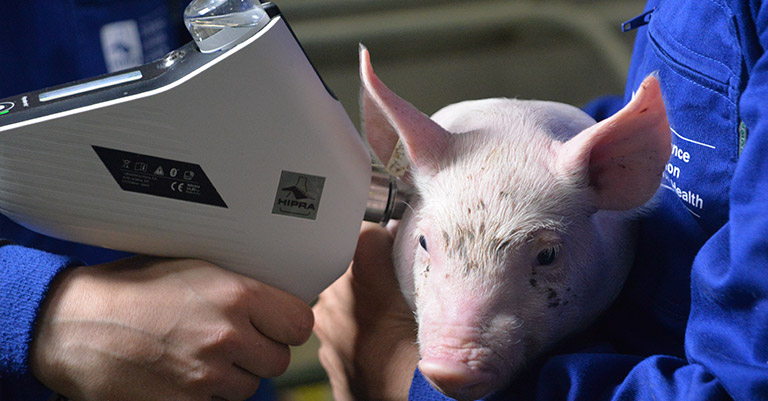 There are many benefits of the intradermal application of vaccines with a needle-free jet injector, especially with regard to the non-use of needles, such as: elimination of the possibility of broken needles and damage to the carcass, or the risk of accidental needle stick injuries to employees.

They also reduce the risk of spreading viraemic disease such as PRRSv, which occurs when re-using the same needle-syringe on multiple animals.

In addition, needle-free vaccination through intradermal injection has many advantages compared to other types of vaccination, being a less invasive technique and causing less anxiety and pain to the animal.

Lowering the pain and stress of pigs in production has been shown to increase their general health and growth capabilities (Martínez-Miró et al., 2016).

The mechanism of needle-free jet injectors relies on the principle of forcing fluids through a small orifice, generating a high-pressure stream that penetrates into the skin with a high velocity (of approximately 100 m/s).

The impact of the fluid on the skin generates a hole through which the liquid is forced into the tissue without the help of a needle.

The delivery of a liquid formulation by a liquid jet injector can be divided into three general stages, requiring a total time of less than 0.3 seconds:

At first a peak pressure phase is observed, with optimal pressure used to penetrate the skin (Figure 2. Pressure profile: A).

This is followed by the dispersion phase. B), that provides a wide dispersion of the liquid into the tissue as it forces a path through low resistance regions, resulting in a widely dispersed, spider-web- like distribution of vaccine.

This wide dispersion of vaccine is thought to increase exposure of antigen to antigen presenting- cells, thereby resulting in an enhanced immune response.

Finally, there is the drop-off phase (Figure 2. Pressure profile: C).

The consistent pressure profile of a needle-free jet injector ensures a homogenous process where each animal is vaccinated at the selected tissue depth (Chase et al., 2008).

Figure 2. Representation of the three different pressure stages of a needle- free device during the intradermal administration of a vaccine into pig skin.

In the case of the intradermal application of vaccines, it is important to adequately adjust the pressure and force of the needle-free device to ensure a deposit of the vaccine specifically at the dermis layer (Figure 3).

When depositing an intradermal vaccine outside the dermis layer the efficacy expected cannot be guaranteed.

Therefore, it is important to highlight that not all needle-free jet injectors available on the market may be able to perform with the same precision to ensure successful delivery of the vaccine at the dermis layer.

How useful was this information for you?:

Hipradermic® across the world: users’ overview

Hipradermic®, a needle-free jet injector for intradermal application of swine vaccines, has been on the market since 2015. 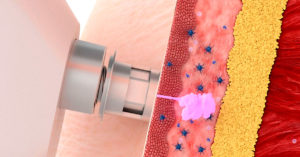 Needle-free jet injectors for intradermal vaccination of pigs: the importance of precision

Needle-free vaccination through intradermal injection has many advantages compared to other types of vaccination, being a less invasive technique and causing less anxiety and pain to the animal. 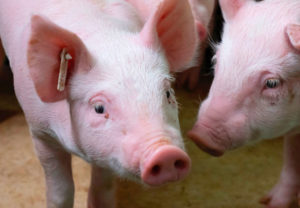 Hipradermic® reduces behavioural indicators of pain compared to IM vaccination with a needle and represents an alternative for improvement of animal welfare on swine farms.

This website uses its own cookies and those of third parties to improve our services and navigation. By clicking on Accept you consent our use of all these cookies. You can also opt to change your settings. For more information, see our cookie policy. Read More

This website uses cookies to improve your experience while you navigate through the website. Out of these, the cookies that are categorized as necessary are stored on your browser as they are essential for the working of basic functionalities of the website. We also use third-party cookies that help us analyze and understand how you use this website. These cookies will be stored in your browser only with your consent. You also have the option to opt-out of these cookies. But opting out of some of these cookies may affect your browsing experience.
Necessary Always Enabled
Necessary cookies are absolutely essential for the website to function properly. This category only includes cookies that ensures basic functionalities and security features of the website. These cookies do not store any personal information.
Analytics
Analytical cookies are used to understand how visitors interact with the website. These cookies help provide information on metrics the number of visitors, bounce rate, traffic source, etc.
SAVE & ACCEPT

Controller: LABORATORIOS HIPRA, S.A.
Purposes: Managing the contractual and/or business relationship with HIPRA, including sending news, promotions and invitations to events sponsored by HIPRA.
Lawful basis: Performance of the contractual relationship and HIPRA’s legitimate Interest.
Recipients: Third parties to which HIPRA has entrusted cloud computing, security, auditing, mailing, technical and computer support services, as well as companies in its group.
Rights: Request access to and rectification or erasure of personal data and other rights as explained in the additional information. You can seeview the detailed additional information about data protection in our Privacy Policy.